As mentioned previously, back in August we drove from Cambridge, MA to Mountain View, CA. We had some time, so we took a pretty circuitous route up through Montana and down US 101 along the Pacific coast. I’ve been meaning to post some photos here forever. Realizing that it’s darn near 2017 has given me a nudge.

We drove down to my hometown of Lancaster, PA, then over to Jenny’s in Columbus, OH, and swung down south to check out Mammoth Cave NP.

We’ve got some photos from the eastern half of the country, but they’re not especially striking. Let’s just skip directly to Colorado.

Here’s Boulder, from the top of the hiking trail up nearby Mt. Sanitas. I spent a summer in Boulder five years ago (?!) and I’m engaged in an ongoing project to convince Jenny to move back with me.

We took a day trip up to the Rocky Mountain NP. The weather wasn’t cooperative, unfortunately, and we were rained out early, but we saw a few lovely sights. 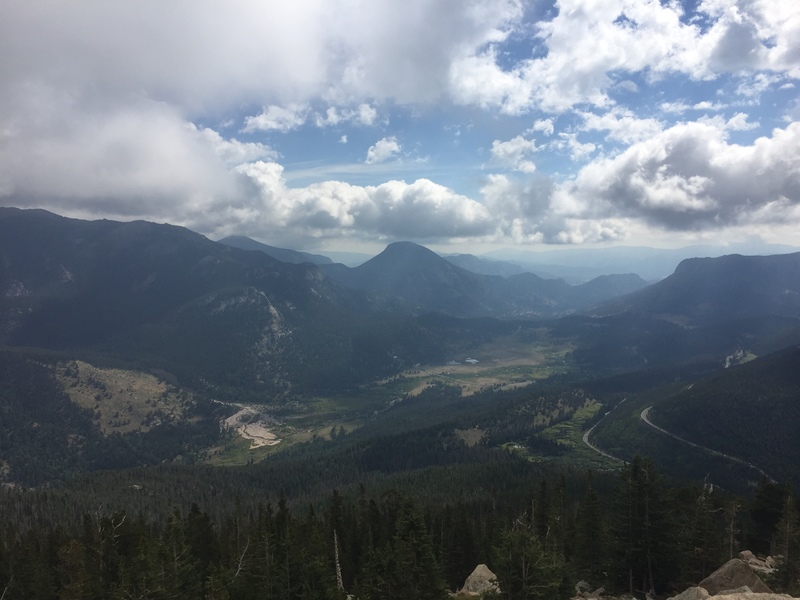 We spent a night in Cody, WY and approached Yellowstone NP from the east, passing a mysterious Bob’s Big Boy: 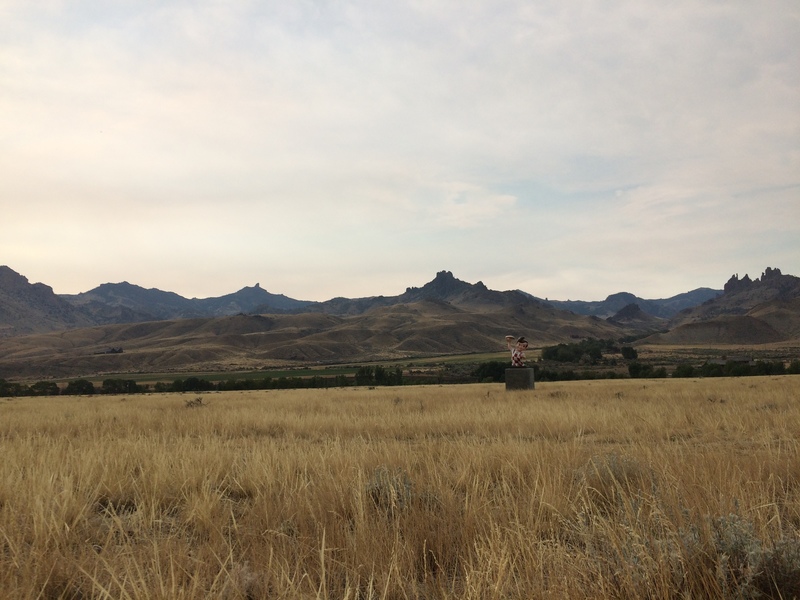 At the park entrance we were given an ominous pamphlet. 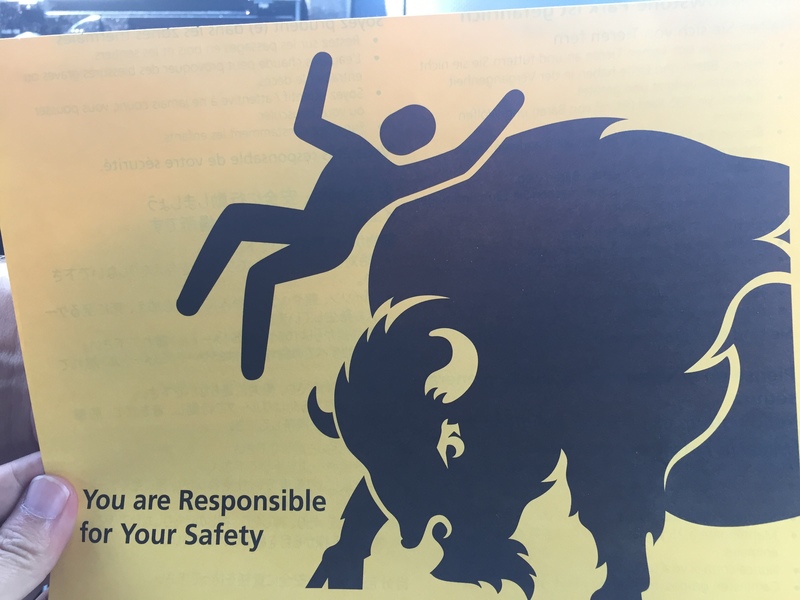 Within five minutes we encountered this guy wandering down the road: 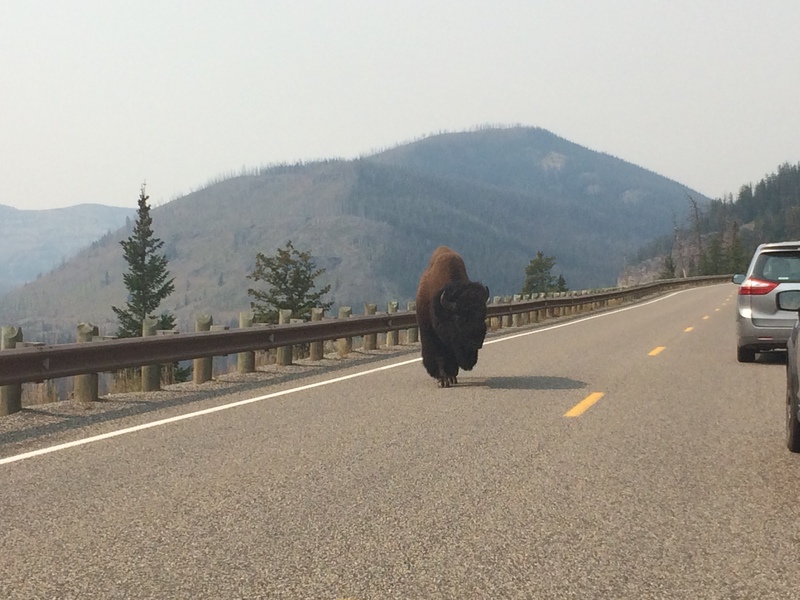 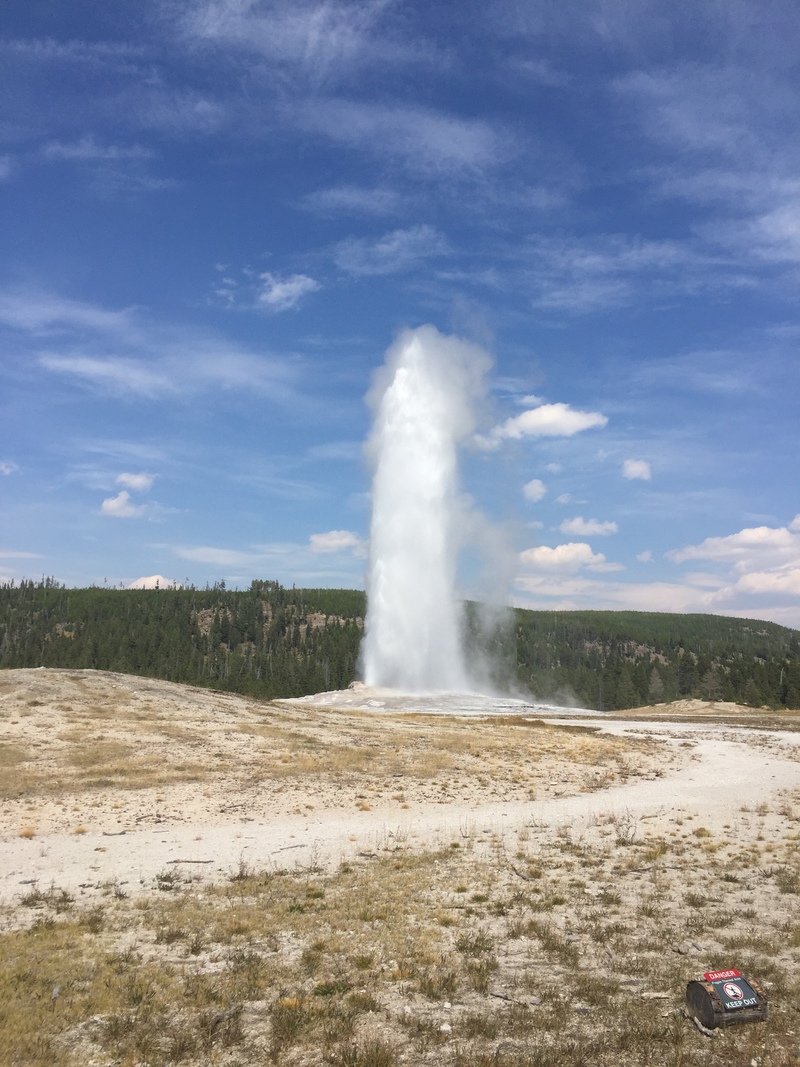 As fans of PCR, we were anxious to visit the hot springs and check out the extremophiles: 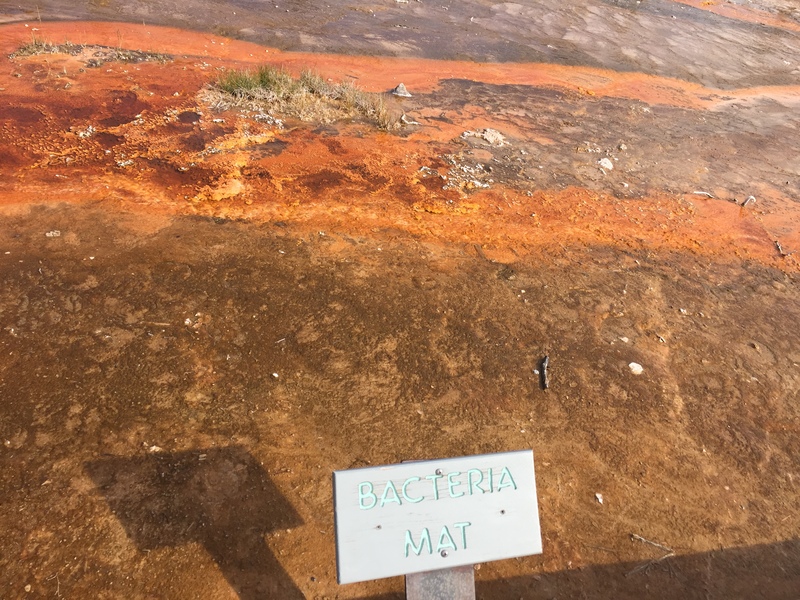 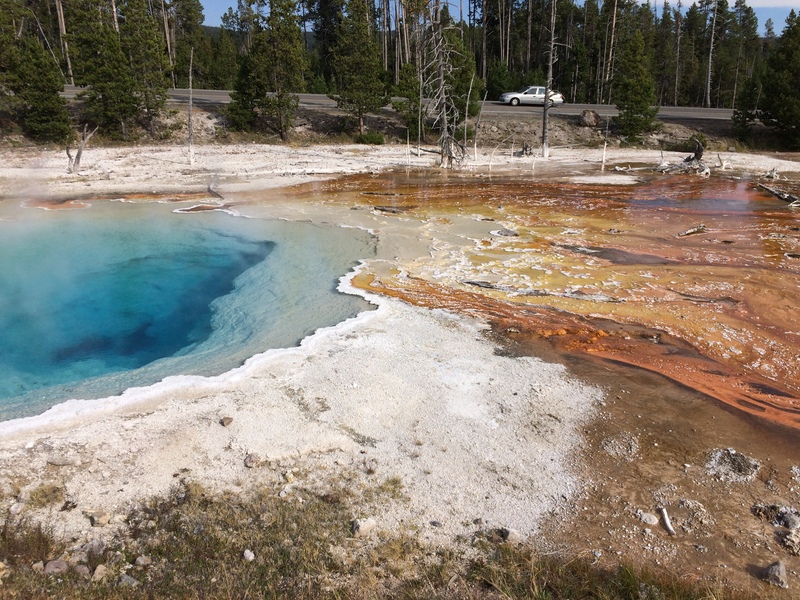 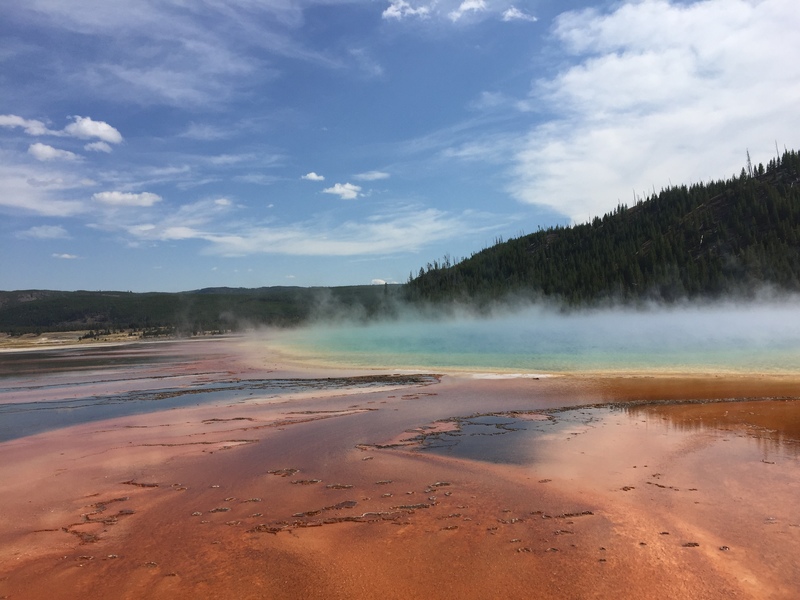 The paint pots were a bit underwhelming: 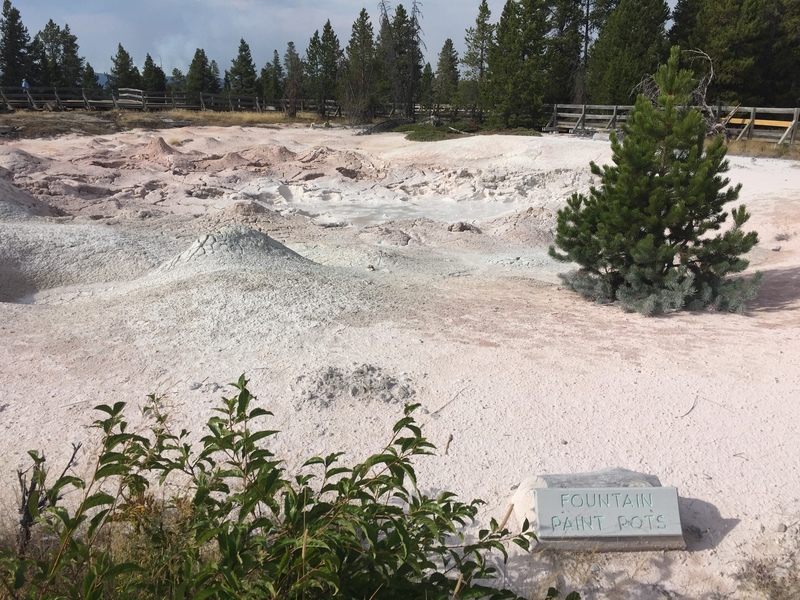 On the way to our campsite we noticed a crowd of cars parked along the road. We stopped. A crowd of visitors was watching a grizzly bear eat a bison carcass across the river. 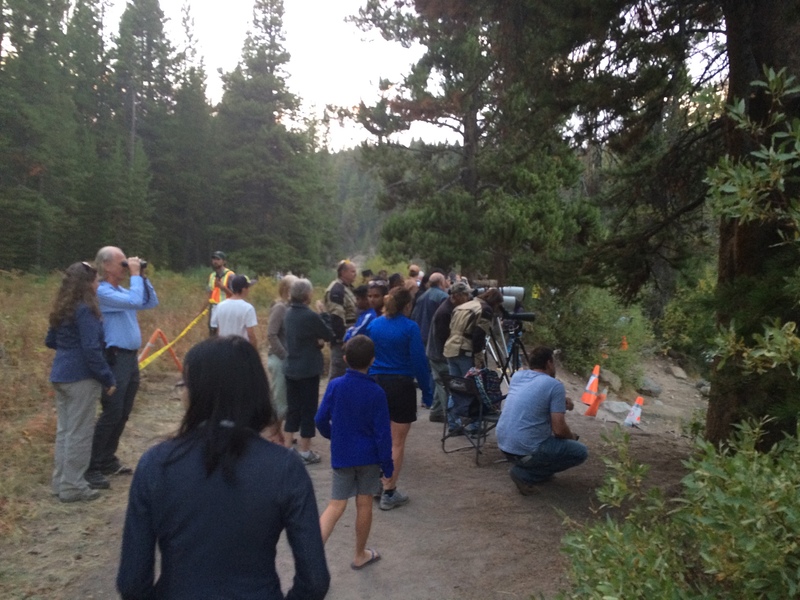 One of them let us take some pictures through her scope: 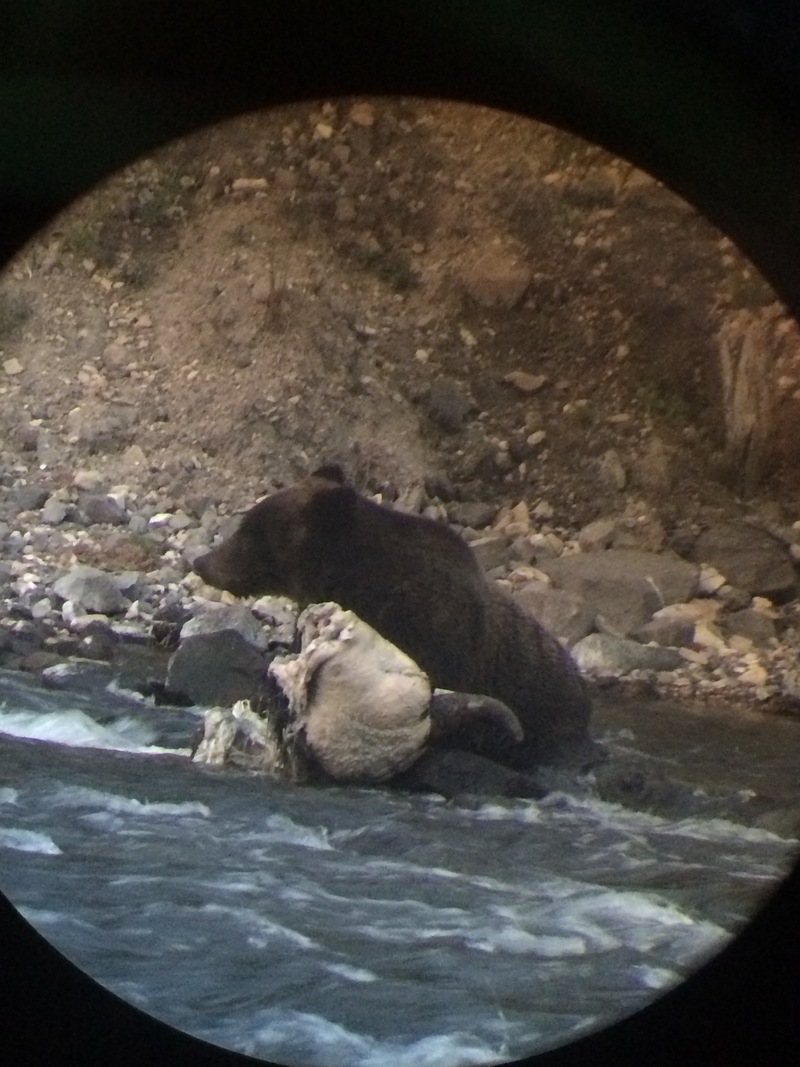 It wasn’t a terribly wide river, and it was an awfully large bear. A number of rangers were arrayed around the crowd with big cans of bear mace on their belts, which was mildly reassuring.

We camped in the park overnight. It was chilly the next morning, so the steam from the hot springs really stood out. 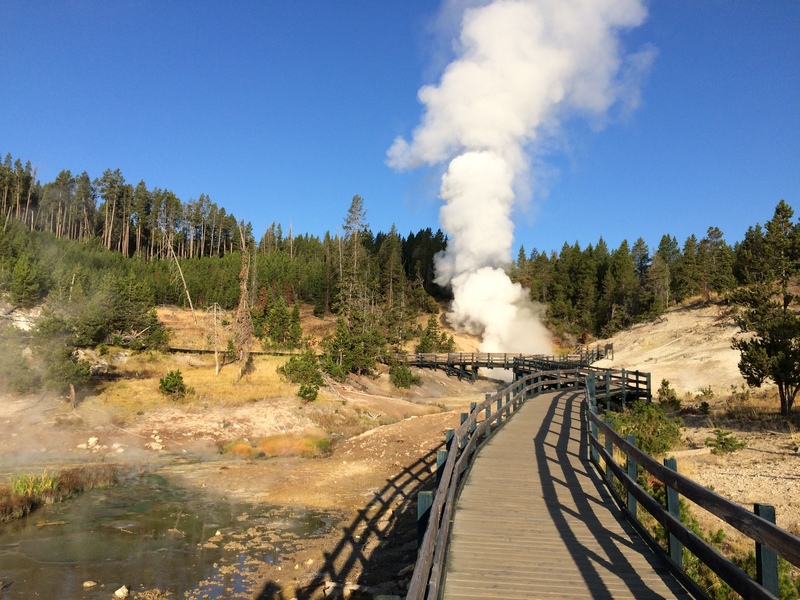 We passed by the falls: 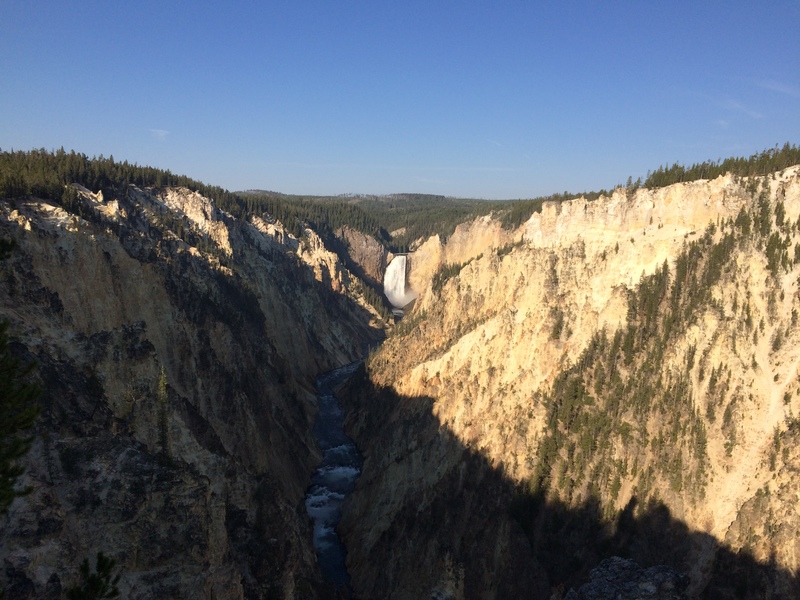 Jenny loves herds of things, so we took a side trip up the Lamar Valley to look for more bison: 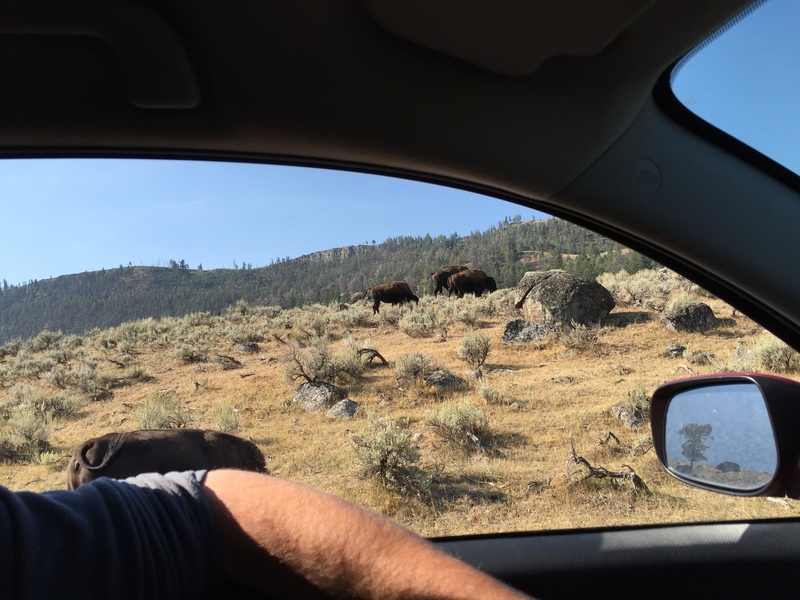 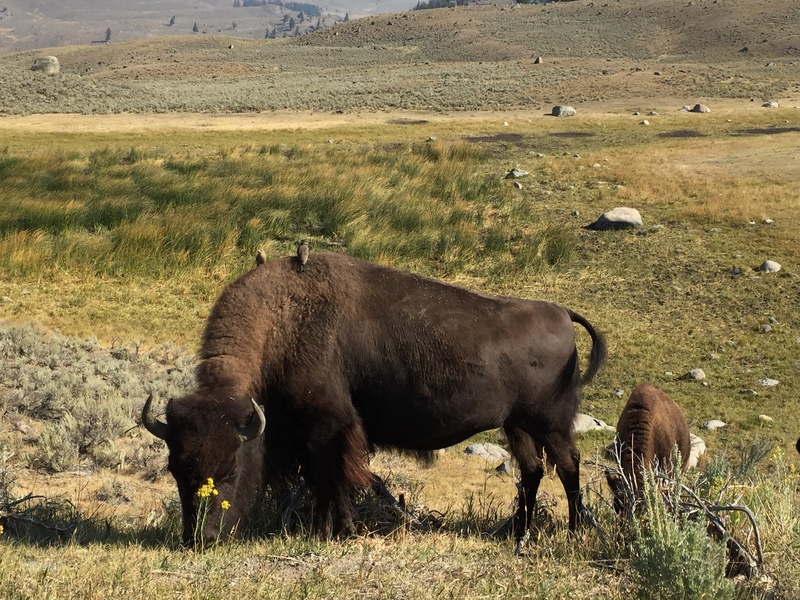 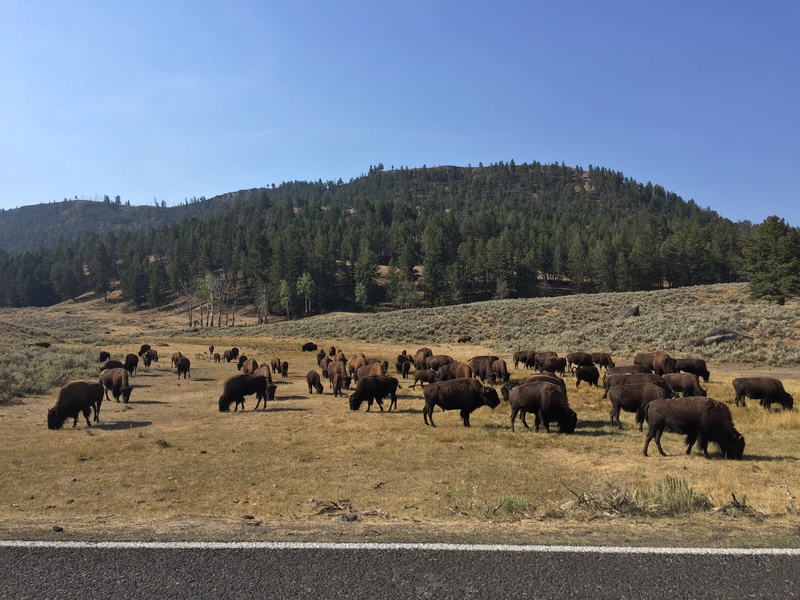 After Yellowstone we headed up through Montana to visit Glacier NP, which was similarly lovely (but surprisingly crowded). 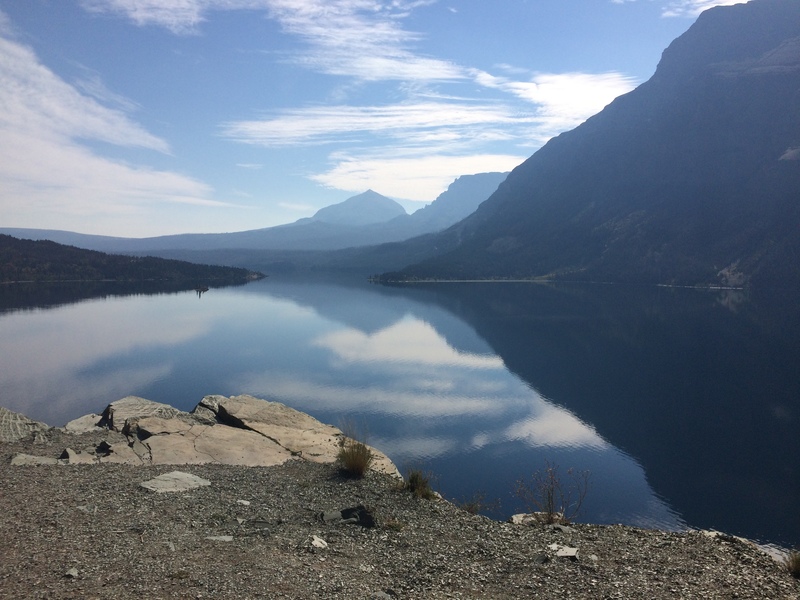 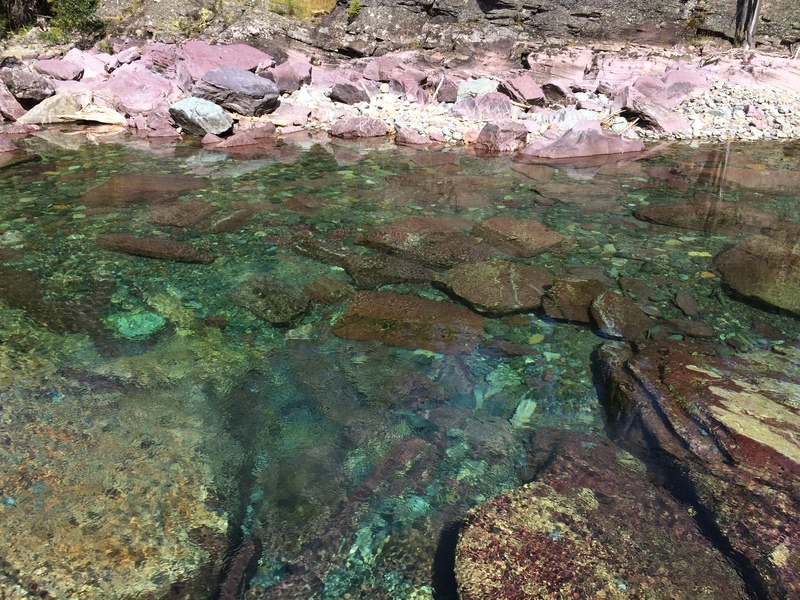 From there we headed southwest through Idaho and Washington and drove along the Columbia River Gorge, where we visited Multnomah Falls. 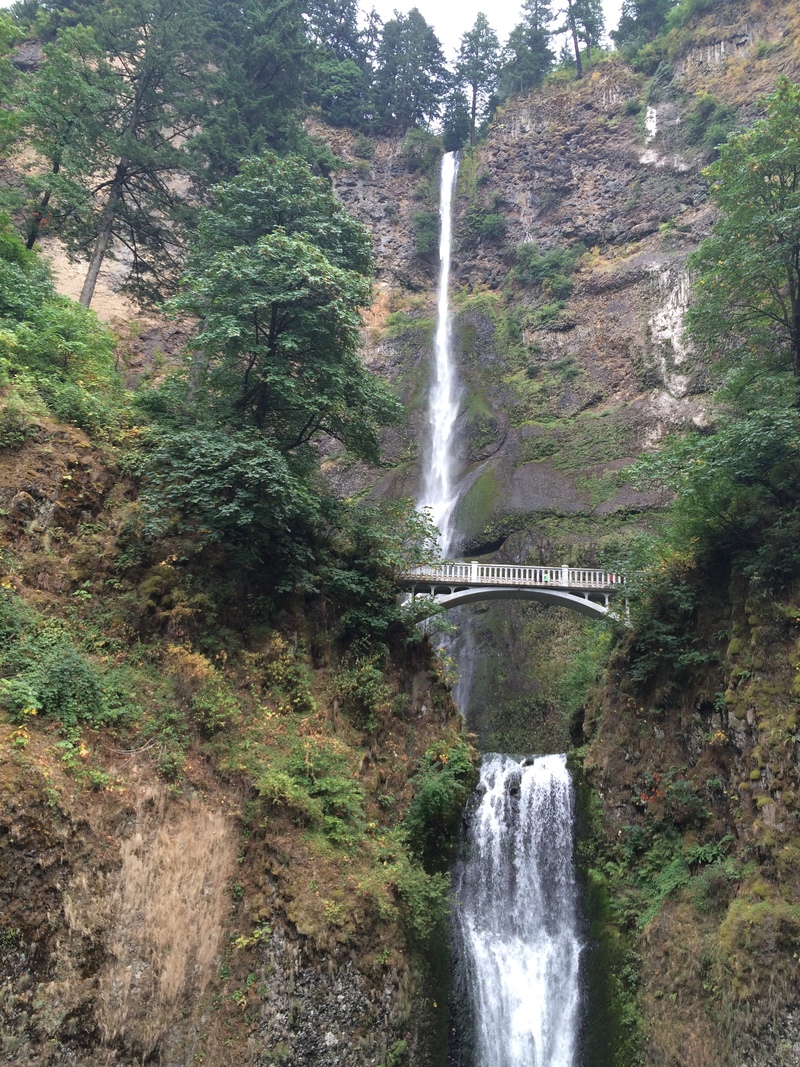 We spent a night in Portland and traveled down the Oregon coast, heading back east briefly to camp at Crater Lake. 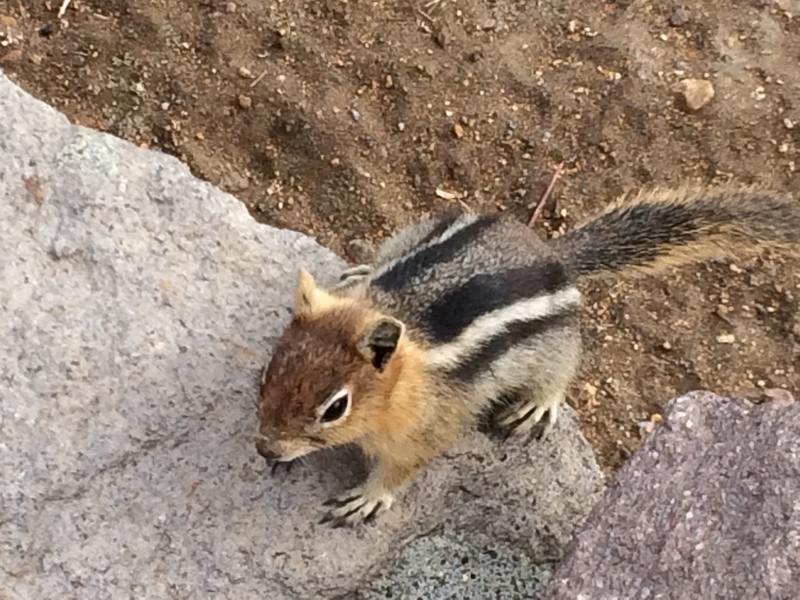 We also camped down in the redwoods outside Crescent City, CA. They’re pretty big. 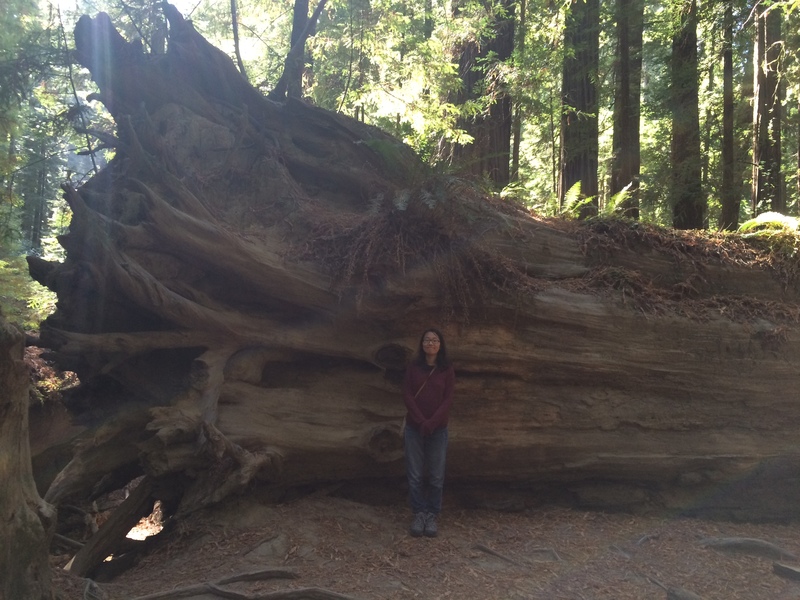 After that we spent a couple days just driving down the coast highway. 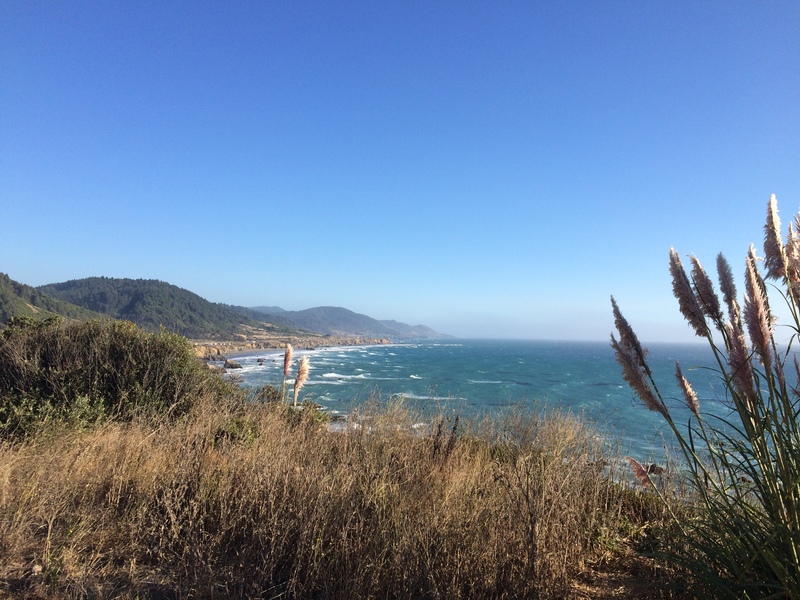 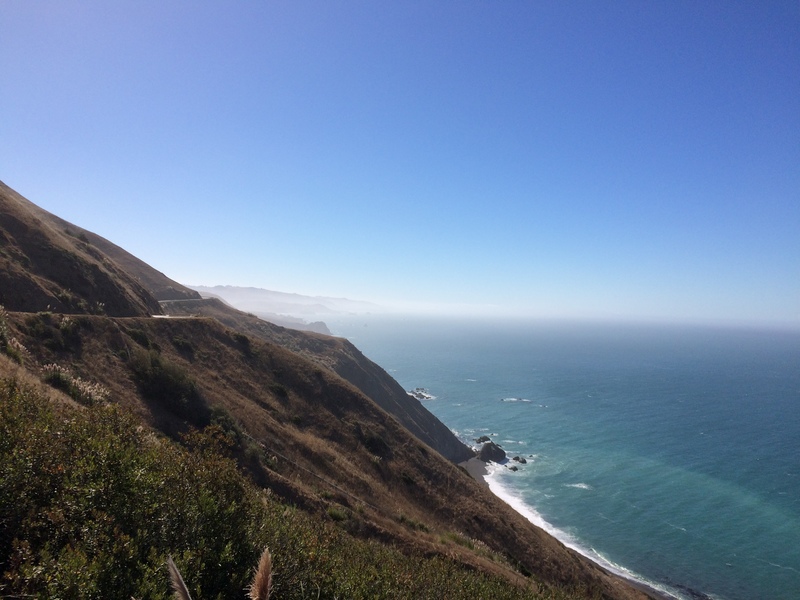 Eventually we hit SF, spent a night with Albert at his apartment, and moved on in to our temporary corporate housing.

Road trips! We should do more of those.