I first went to China over the winter of 2016, when Jenny and I spent a couple of weeks at her grandparents’ apartment in Chengdu. It was a lovely trip, but I still viscerally remember it being so cold inside! Apparently, homes in Sichuan usually aren’t heated. 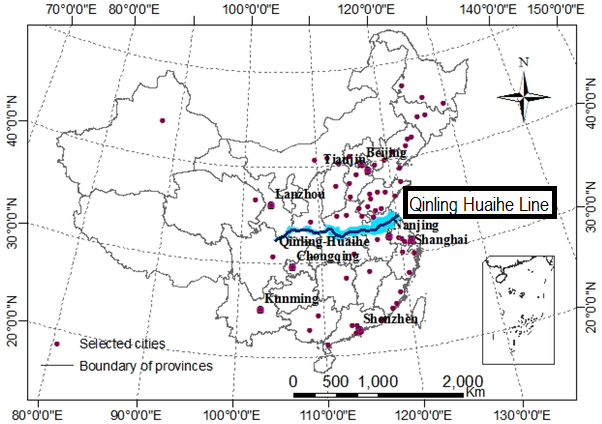 It turns out that that’s not just a convention, but a deliberate government policy. The boundaries of that policy are defined by a geographic divide, the Qinling-Huaihe Line:

In the 1950s, Premier Zhou Enlai used the line to create a subsidized district heating system only in the colder north, a system still in effect today. This has also led to the north to suffer from heavy air pollution due to coal heating plants, but the south to suffer from lack of heating during the winter months.

The divide functions a bit like the Mason-Dixon Line in the States, which similarly divides the warmer, traditionally agricultural south from the colder and more conventionally industrial north.

It’s also handy for thinking about Chinese food. Wheat can be grown north of the line, and rice only grows to the south. When you think of dumplings and pulled noodles, that’s classically northern cuisine; rice and stir-fries are associated with the south.

And—also like the Mason-Dixon Line—it’s often used within China to define regional stereotypes. Wheat can be grown by an individual farmer, but rice is more intensive and requires a group effort. Folks in the south are broadly inclined to see northerners as individualistic and selfish, and northerners stereotype southerners as lazy and agrarian.

And finally, again like the Mason-Dixon Line, the Qinling-Huaihe Line is a comically crude way of compartmentalizing a really complex country, but it’s still a handy heuristic!