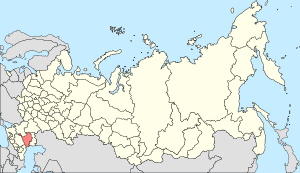 I was originally going to do a well-researched write-up of this situation, but honestly I can’t phrase it any better than Andrei Codrescu, so I’ll just quote him verbatim:

There is still a Lenin statue in Kalmykia. After the death of communism and leninism, Kalmykia’s dictator, Kirsan Ilyumzhinov, a bona fide Grand Master of Chess [and current FIDE president], conceived of the idea of lifting his desert people in Southern Russia from poverty into 20th-century affluence by means of chess. Like a Pharaoh using the entire country’s resources, he built Chess City in Elista, the capital, to host a World Tournament of Chess. The teaching of chess was made obligatory for all school grades, and chairs of chess were established at the university. He intended, as he told a journalist, to make chess “the religion” of the Kalmyk people. The Kalmyk religion is Tibetan Buddhism, and the Kalmyk lamas are appointed directly by the Dalai Lama, who visited Kalmykia in the 1990s. For six decades of Soviet rule, Buddhism was dismissed as a superstition, but the religion revived with great fervor after the USSR dissolved. Ilyumzhinov’s effort to replace both communism and Buddhism with the religion of chess was met with derision, but that response was quickly silenced by the brutal suppression of critics. Lenin’s birthplace, after the death of leninism, rose from the ashes as a dictatorship of chess.

If you didn’t get the idea, Kirsan Nikolayevich Ilyumzhinov is crazy.