Y’know how some programmers (and technical people in general) will occasionally drop jargon to demonstrate that they understand something complex, even if it’s unrelated to the topic at hand? It feels like a way to announce, “look what I know!”

After dropping an intimidating term the perpetrator will often feign surprise when a listener asks about it, further establishing them as an expert and discrediting the person who asked. This is a form of technical negging.

Computer science classes in school were full of people doing this. I haven’t noticed as much of it since then, but I still run into it from time to time, mostly from younger guys. I kinda get the impression that it arises from a feeling of insecurity. Impostor syndrome, maybe?

Frilled lizards, when they feel threatened, will unfurl a flap of skin around their necks to make themselves look bigger and more intimidating than they really are. It looks like this: 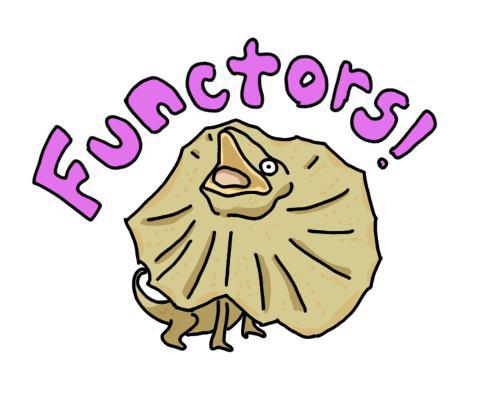 Jenny and I have started referring to this inappropriate-term-dropping behavior as “frilling,” and we invite you to adopt the term, too.

This is something we should all stop doing! I kinda sympathize with the perpetrators—they’re probably feeling intimidated and want to establish a place for themselves—but they’re making everyone else feel intimidated, too, and that’s a lousy thing to do.

I’m definitely not arguing against the appropriate use of jargon. Using technical terms where they’re relevant, and where your audience can be expected to understand them, is helpful—heck, I just wrote a post titled Lifting Lambdas Into Supercombinators. Being interested in and sharing technical subjects isn’t a problem—it’s great!—but deploying that information to make other people feel bad sure is.

Props to Jenny for the ridiculously great lizard cartoon. For the record, I think functors (and functor enthusiasts) are great!