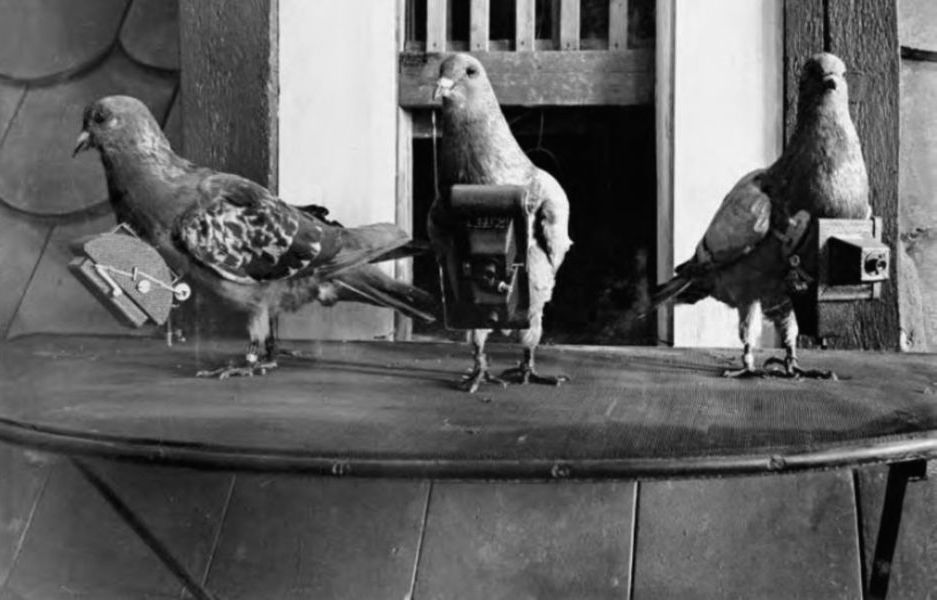 I just discovered the wonderful Wikipedia page on pigeon photography:

Pigeon photography is an aerial photography technique invented in 1907 by the German apothecary Julius Neubronner, who also used pigeons to deliver medications. A homing pigeon was fitted with an aluminium breast harness to which a lightweight time-delayed miniature camera could be attached.

Initially, the military potential of pigeon photography for aerial reconnaissance appeared attractive. Battlefield tests in the First World War provided encouraging results, but the ancillary technology of mobile dovecotes for messenger pigeons had the greatest impact. Owing to the rapid perfection of aviation during the war, military interest in pigeon photography faded and Neubronner abandoned his experiments. The idea was briefly resurrected in the 1930s by a Swiss clockmaker, and reportedly also by the German and French militaries. Although war pigeons were deployed extensively during the Second World War, it is unclear to what extent, if any, birds were involved in aerial reconnaissance. The United States Central Intelligence Agency (CIA) later developed a battery-powered camera designed for espionage pigeon photography; details of its use remain classified.