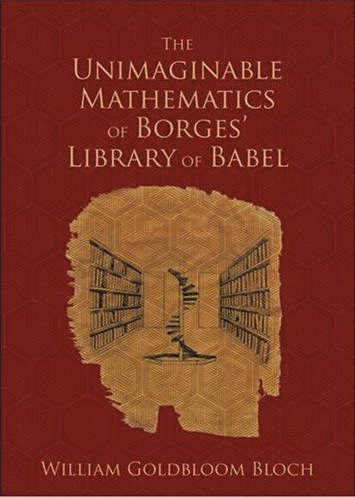 I recently finished reading William Goldbloom Bloch’s The Unimaginable Mathematics of Borges’ Library of Babel. As was the case with the Atlas of Remote Islands, most of my reading time was spent beaming at the unlikeliness of the book’s existence. Borges’ work could be described as “literary nerd-sniping,” so the notion of a mathematician devoting a book to an analysis of one of his stories makes perfect sense—it’s just a bit rare to see those spheres overlapping.

The mathematics the book employs isn’t terribly difficult, since it’s written for the interested layman. Conversely, if your academic background is sufficiently mathly you’ll probably find yourself skimming occasionally, but there’s still quite a lot in there to enjoy. The book is great at communicating the pleasure of doing mathematics for its own sake, and that aspect really struck a familiar chord with me. Who doesn’t enjoy discovering that The Library would contain enough books to fill 101,834,013 universes?

I’ll also add that any writer who, in his preface, defines his intended audience as “Umberto Eco” has won a fan for life.