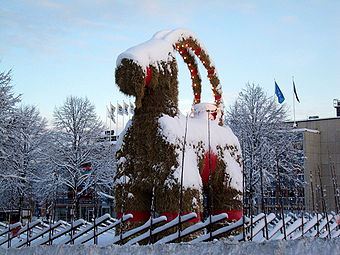 My pyromaniacal readers will no doubt be thrilled to hear that the Gävle goat has once again been reduced to cinders.

“It feels very sad,” Ostman said. “We had really hoped that he would survive Christmas and New Year’s.”

Vandals have burned down the goat 24 times since it was first set up in Gavle in 1966 to mark the holiday season. It has also been smashed several times, run over by a car and had its legs cut off.