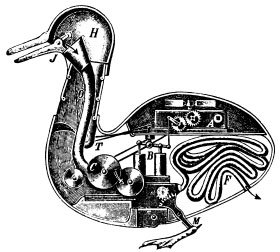 The eighteenth century was a golden age for clockwork contraptions (see The Turk (sort of)). One of the more renowned creators of these devices was Jacques de Vaucanson (1709-1782), a French inventor and bureaucrat most famous for his Digesting Duck.

This remarkable duck ate food from an exhibitor, swallowed it, digested it, and, yes, produced excreta. Voltaire thought that this contribution echoed the glory of France. It was similar in size to a duck, drank water with its beak, quacked, could rise up and settle back on its legs, and, most amazingly, it swallowed food with a realistic gulping action of its flexible neck.