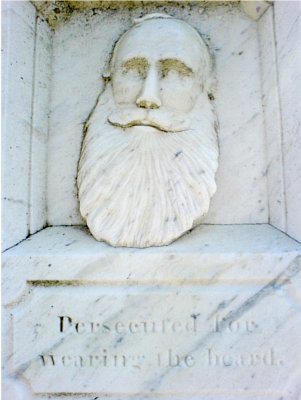 Joseph Palmer (1791-1874) was a Transcendentalist and veteran of the War of 1812. He was also a member of the Fruitlands commune established by Amos Bronson Alcott (the father of Louisa May Alcott, author of Little Women). More interestingly, he spent a year in jail for the crime of wearing a full beard.

Read this better blog’s post for an excellent telling of this wonderful story. Note in particular that his tombstone reads, “Persecuted for wearing the beard.”

While we’re on the subject of Fruitlands, though, let’s examine a few other members of this commune:

All members of Fruitlands were essentially radical in their means of establishing separate identities away from society. Each experienced deep conflicts between their work and their religion, and they all underwent an awakening before joining Fruitlands. One man, Abraham Everett, reversed his name and called himself “Wood Abram.” Another man, Joseph Palmer, insisted on wearing a long beard despite its being totally out of fashion at a time when all men were clean-shaven. Before coming to Fruitlands, in fact, he had been persecuted for his choice: once four men had attempted to forcibly cut off his beard; he beat them off, was arrested and jailed, and refused to pay a fine to be released from prison. Samuel Bower, another member, experimented with nudism after realizing that clothing was spiritually stifling. Samuel Larned came from a circle of intellectuals in Providence, Rhode Island, who admired the transcendentalists. Ann Page (the only woman other than Mrs. Alcott) joined but was expelled for eating a piece of fish. There are also reports of a man who lived one year only on apples and the next only on crackers.